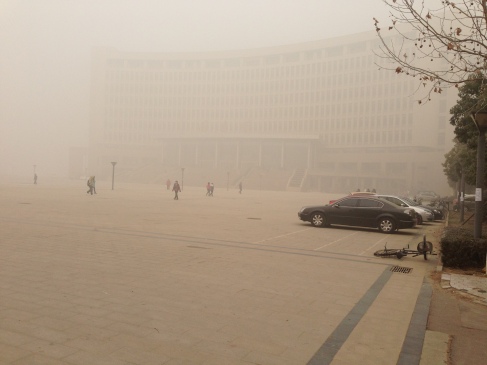 When I walked to my office today, I couldn’t see the building until I was almost at the front door.

My eyesight isn’t the greatest, but that wasn’t the problem. It was Zhengzhou’s dreadful air pollution.

Today was the worst I’ve seen so far. A thick layer of grimy smog blanketed the city, cutting visibility to just a few feet. On our campus at Henan University of Technology, the massive library was nearly invisible. When I checked the weather app on my iPhone, right under the temperature where it usually says clouds, sun or rain, the condition was listed as “smoke.”

Most of China’s major cities are being choked by pollution. Residents are fleeing Beijing because the air is so filthy, and they had to practically shut down Harbin, China’s famous Ice City, for a day after they cranked up the coal plants in October.

The pollution gets worse in the winter because the coal plants are going full blast, but some people wear breathing masks all year round.

China isn’t the first country to sacrifice its environment on the altar of economic progress. The U.S. did the same thing during its industrial boom years. I can remember visiting Pittsburgh in the early 1960s, and seeing the sky turn black from all the factory smoke. Today, Pittsburgh is considered one of the most livable cities in the U.S., though its transformation into an educational, health and high-tech hub was triggered by the collapse of the American steel industry.

Because of its huge population and the unprecedented scope of its industrialization, China has an even bigger obstacle to overcome. The country has started to take steps to control the pollution, but it may be too little and too late.